skip to main | skip to sidebar

Brahma Kamal, named after Brahma, the God of Creation, probably blooms only for one night in the entire year, somewhere between July and September. It is a rare plant that flowers around midnight and survives only for a few hours. It is also commonly known as Nishagandhi in India or ‘Queen of the Night’; The Japanese people call it Gekka Bijin, which means ‘Beautiful Woman Under the Moon’.

Most Indians will relate to the celebration surrounding the blooming of the Brahma Kamal. There is a lot of gossip revolving around the same like only lucky people get to see the process of blooming or that ones who see the bloom get rich and prosperous and are showered with blessings! Whatever be the myth all I can say is that I surely did feel blessed by the serene white beauty of the Nishagandhi. 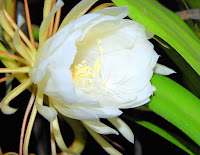 Mom planted the Brahmakamal somewhere around 2007 and finally after a long wait of almost 4 years, Sunday night we gathered around the auspicious plant to enjoy the full bloom of the Queen and her heady fragrance. The vigil started at sunset when he four of us – Mom, Dad, Subhash and I – sat at the dining table, glancing often at the plant with great anticipation.

With passing time she revealed more and more of herself was at her stunning best by midnight. And as if the visual wasn’t glorious enough, she filled the whole room with a bewitching fragrance. We all were totally ecstatic to witness this beautiful creation of the nature. Like we were advised we prayed to the flower and also entertained a few people who came over to pay their so called respects to the Brahma Kamal. 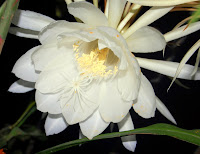 If you take a closer at the flower, you'll see the central white stamen which people believe represents Lord Krishna, while the reddish brown stalks which you can see on the closed bud represent the 100 Kauravas from the Mahabharata. I don’t know how far these myths are true but the Brahma Kamal in itself is truly divine and no wonder the Japanese named the Queen, ‘Gekka Bijin’.

Post midnight the flower began to close, unbloom as I like to call it. By morning she was back to being a bud again. Truly marvellous. Most of the people today argue that this flower is not the original Brahma Kamal but even if it is true, it in no way takes away credit from our splendid rendezvous with our pseudo 'Brahma Kamal' ;)

The entire process of watching the Brahma Kamal bloom and unbloom has made me think of the metaphor for our lives. At her moment of glory the queen didn’t know that her life was only for a few short hours but still she gave her everything for that single blaze of glory and then she was tired and exhausted. She thus teaches us to give our best shot at anything and everything because it is not the length of glory but the glory itself that people reminisce forever.

The five hours that we spent watching her bloom without even blinking for a second made me realize how important it is to watch at the right moment. So many times we miss the smile on the face of our loved ones just because we dint look at them at the time they were smiling.

It is really amazing how watching a flower made me learn such lessons of lives which would have otherwise taken years.

Posted by Soumya Kutty (Embanath) at 2:59 AM 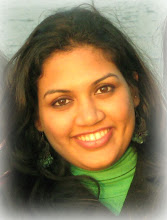